Skip to content
Home/Blog Post/The Earlier the Better for a CCRC Move: Health and Longevity at CCRCs
Previous

The Earlier the Better for a CCRC Move: Health and Longevity at CCRCs 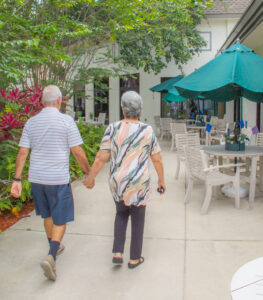 There are two common reasons seniors put off moving into a CCRC. One is that they’re not completely ready to leave their homes and the other is that they don’t feel like they’re “old enough.”

But being “old” is subjective, and opting to move into a CCRC doesn’t mean giving up your independence and active lifestyle. In fact, it’s the complete opposite. Moving into a CCRC can have a positive impact on your health and longevity.

A Positive Mindset on Aging

There is a widening gap between older people’s chronological age (their age based on the number of years they’ve been alive) and how old they feel on the inside. So it’s no surprise that people in their 70s and 80s feel like they’re “not old enough” to live in a CCRC.

But being “old” and moving into a retirement community doesn’t have to fall into ageist stereotypes. Researchers have found that having a positive view of aging and what it means to be “old” can actually lengthen people’s lives.

How CCRCs Influence Health and Longevity

The average age of seniors who move into a CCRC is somewhere between 70 and 80 years old. But seniors can move into Buena Vida Estates as early as 65 – and the earlier you make the move, the better.

Everyone ages at a different pace and environmental factors can play a huge role. Things like diet, exercise, and other lifestyle habits can influence our health and longevity and just how old we feel inside. At a CCRC, you’ll meet 85-year-olds who are as active as other 65-year-olds.

This is because living in a retirement community can actually help keep you healthy and active.

The Benefits of an Early Move

There are many advantages to making a move to a CCRC sooner rather than later. Moving into a CCRC at a younger age:

At Buena Vida Estates, we believe in cultivating the happiness and well-being of every one of our residents. We’d love to show you how much fun a retirement community can be and that you’re not “too young” to live the GoodLife.