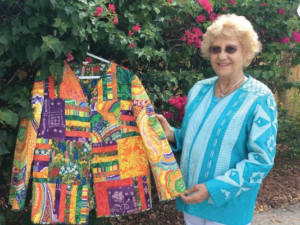 This featured Buena Vida Estates resident has had her share of hard knocks along the way of life, but she graciously and gracefully meets setbacks as part of the journey.

Born in Nashua, New Hampshire, Lee married her high school sweetheart, Terry, at age 19. Terry was a pilot in the Air Force, and the young couple lived in Virginia, San Antonio, Winter Haven, West Texas, Phoenix and Miami, where Terry died when he was 25. “I was only 23,” said Lee. Instead of sinking into a morass of grief, Nancy Lee chose to embrace life to its fullest. “I did not want to get to the end of my life bemoaning the things I could have done.”

After completing her bachelor’s degree in education from the University of Miami, and earning a master’s degree in art education at Florida International University, Lee taught in Dade County schools for a decade. Later she went on to earn a degree in interior design, and obtained a real estate license in both Florida and Hawaii!

It’s safe to say that travel and art have always been a part of Lee’s life, which so far has been colorful and filled with adventure; from camping through Europe in a Citroen 2CV one summer (sleeping in a two-person tent in the crater outside Pompeii), to summer camping throughout Washington state and British Columbia (bears and all!), and living in Maui to soak up sun and native culture. “I fell in love with Lahaina, the local people, as well as the mainland transplants, the music, the lifestyle, the gentle breezes. I enjoyed life in Lahaina for 18 years and loved every minute of that time.”

While living in Maui, Lee found employment at an upscale gift shop that mainly featured handmade items, and her time there only fueled her passion for art. With her own art experience ranging from crafts, 4-H and sewing, jewelry, photography, textiles and pottery in college, the vibrant lifestyle Lee encountered in Maui has since been channeled into her newest hobby- quilting.

Since her return to the mainland, Nancy Lee has joined the Buena Vida Community and shows no signs of slowing down. After a cousin in California brought back Lee’s interest in sewing through wearable art, Lee has spent five to six weeks each year for the past few years traveling by car throughout the United States, and visiting quilt shops along the way. “What a phenomenally beautiful and interesting country we have, with such history, great food and friendly people everywhere!” Lee said.

Nancy Lee has also joined the Seaside Piecemakers Quilt Guild, as well as Coastal Quilters, and presented the idea of having a quilt group here at Buena Vida! The Buena Vida Stitchers meet once a month to make quilt tops for homeless children through Coastal Quilters, and sew stuffed animals for children who find themselves in the hospital emergency room.

“No day is long enough to do all the things I’d like to do. Don’t let anyone tell you retirement is boring. It certainly isn’t!”