Janet Kemp was born in Stockbridge, Michigan in December 1931. She went to High School in Dexter, Michigan where she met her first husband, Floyd. They built a home outside of Dexter and had 2 children. When her children were about 8 and 9 years old she went to work in a doctor’s office as a receptionist. After 15 years of marriage, she and Floyd divorced and Janet and her daughter moved to an apartment together. 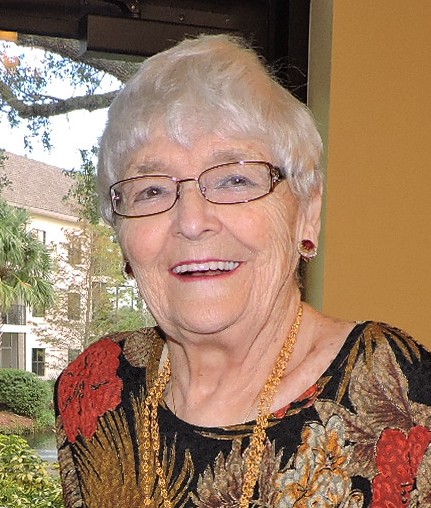 Janet worked in an Otolaryngologist (Ear, Nose, and Throat) office and eventually remarried. Joe was a doctor and the two of them brought their families together and enjoyed vacations where they went on cruises or camping in tents or trailers. Janet’s hobby was bowling and she loved it so much that she remained in the same bowling group for 30 years!

Janet and her husband, Joe, moved to Florida in 2004. She remembers it as being a hurricane year. Janet’s daughter lives in Satellite Beach and she and Joe ended up buying a house in the Sherwood Park community. They lived there until 2008.

She and Joe had heard about Buena Vida Estates and moved into the community in January 2009. Joe passed away just a year later. Janet considers Buena Vida the most comforting place to be. Janet says “They don’t push you, but they are there for you” in regards to the people she has met throughout the community.

Janet enjoys being involved in many different groups in Buena Vida. She volunteers in the Country Store and she is part of the Welcoming Committee.  She says, “she loves people and tries to make them better when they’re feeling down” since the transition can be difficult at first. Since she’s moved to Buena Vida, Janet says, “she can’t count the amount of friends she’s made!”  Having such a big heart, it’s no wonder she’s made so many friends throughout our community.

The Buena Vida Family is grateful to have such a friendly and caring person to help us welcome our newcomers and we’re happy to share a little piece of her story.