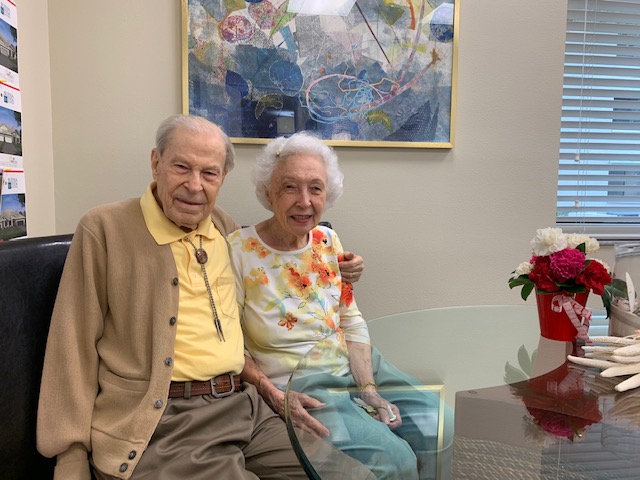 Arthur and Patricia Moyer met 70 years ago this April. They eloped in June of that year. With that many years together, you can imagine the stories they have to tell!

They were both in the Navy. Art became a Research Chemist, and Pat was an Occupational Therapist. Later, Pat became a teacher for over ten years.

She learned her independence from her mom, who was divorced right after Pat was born.  Pat traveled with girlfriends after becoming a teacher as Art wasn’t interested in traveling.  She moved to Florida to care for her mom in her later years while Art stayed in Chicago.  Art eventually joined her, where they cared for Pat’s mom and Art’s dad “Pop” for several years. Pat learned to drive at 50.

Together, the Moyers have been part of AARP since 1982 and volunteered for Meals on Wheels for 18 years.

In 1997, the Moyers moved to Buena Vida Estates and have never been happier!  After 23 years, they are living an independent life and working together with the Brevard Public Library to offer our residents the monthly book club, and new offerings of literature.  Pat can be seen walking with other residents to our Jasmine House (memory care) where they spend their time.  Pat enjoys playing the piano while others sing hymns. He also enjoys doing devotions with the residents.

You can catch the Moyers in the dining room each night at a romantic table for two! They will be the first to tell you that they have had a wonderful life together. Art and Pat are happy to be at Buena Vida Estates; they no longer drive or prepare food. They also have lifelong friends to grow old with.  Art and Pat enjoy meeting and getting to know the new “young” residents that are moving into Buena Vida.

Buena Vida Estates is truly the GoodLifesm  for retirement!