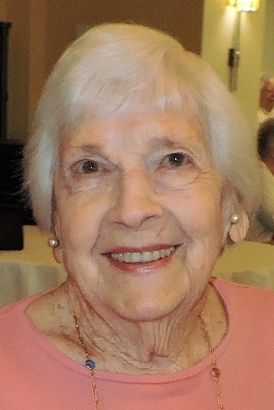 Born south of Nashville in Lawrenceburg, Tennessee – walking horse area, as she described it – Ruby Baker tells of a life where her father doted on her, where Southern women were catered to, and where her mother never learned to drive a car.

Her father was a welder, her mother a homemaker. Schools in the area were not as good as those north Ruby’s parents enrolled her and her sister in grade school in Mount Jackson, Pennsylvania. The sacrifice was not lost on Ruby. During the week the girls would live with their aunt and uncle in New Castle, PA and then home to Lawrenceburg on weekends and summers.

Kids were harsh when they heard Ruby’s strong southern accent – as Ruby tells it, that’s the first thing she made sure to lose. She said having two distinct groups of friends was also hard.

The family relocated to Indiana after Ruby’s father received a surprising letter from a very prominent person.

“My father got a letter from President Roosevelt, ordering him to move his welding business to Evansville, Indiana in support of ship building for the war,” she said.

Ruby completed school but stayed close for college due to the war, which was making it difficult to get around.

“You couldn’t get a Greyhound bus at the time because they were being used to transport troops and things,” she said. “I stayed close and went to Evansville College mainly because I had to.”

Her time at Evansville would be brief. Shortly after enrolling a recruiting event on campus caught her eye.

“The recruiters were asking us if we’d like to learn to fly airplanes,” Ruby said, “and who wouldn’t want to learn to do that? So, I signed up.”

Ruby joined the Civil Air Patrol, with the task of eventually patrolling the Ohio River on watch for enemy submarines that might try to destroy American ship building facilities.

“For two months all we did was march,” Ruby said. “It felt like it went on forever until one day we got into the Piper Cub airplanes and started taking classes and flying all day. For three years we patrolled looking for German subs and only once did we have a sighting which turned out to just be an old log floating in the river.”

While Ruby didn’t see much action in the CAP she did rise to the rank of 2nd Lieutenant and made great friends. She also trained in the control tower on the radar equipment. After the war ended Ruby continued her pursuit of her education, returning to college to complete a math and science degree in Evansville.

She left Evansville for Cleveland, Ohio in search of a job. An ad in the paper led her to a position as secretary to the head of a department at the Cleveland Electric Illumination Company. Ruby said she loved that job and it ultimately led to her meeting her husband, who was the Director of Corporate Relations for the company. The couple dated for two years, got married, and moved to a small historic town nearby where they bought an 1840’s Greek revival home they restored.

Ruby stopped working after the couple had children – a daughter and two sons. While living in Hudson, OH the children grew and became avid skiers. A ski resort opened three miles from the family home, Ruby and the kids, especially her two sons, loved to ski together.

One of Ruby’s friends was leading an initiative to get ambulance service in the town and for the resort, and asked Ruby if she would drive the ambulance. Ultimately this became the beginnings of a ski patrol – Ruby took nursing courses and became employed by the ski patrol, which also helped offset the costs of all that skiing the family was now doing.

Her sons, once in high school, also wanted to become ski patrol members and one-by-one they completed the coursework and training required to join. The three would travel to nearby states to work other ski resorts – Ruby reflects on those days as some of the most important to forging her family’s relationships.

Eventually her husband left the illumination company and took a job for Harris Corporation as the Public Relations spokesperson. Harris bought a smaller company in Florida and offered to move 13 couples. Their kids were already in college, so Ruby said the decision to move made sense. Her husband retired from Harris in 1985 and passed away in 1995.

Ruby remained in the couple’s home for five years before learning of Buena Vida from friends who had moved in and liked to host dinner parties in their apartment.

“There were about eight of us who would get together for drinks, dinner parties, and eat at the pub,” said Ruby. “After being alone for enough time my daughter finally asked if I was tired of taking care of my ocean house and asked me to look at moving to something smaller.”

Since moving to Buena Vida, Ruby said she remains active playing cards, exercising, and going to the Pub with new friends.

“The people here are the best part,” said Ruby. “Everyone is so friendly, so genuine.”